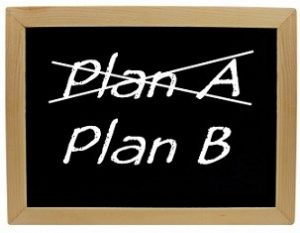 As I walked back to our hotel the night before the Boston Marathon, I was just mad. Even though I knew I couldn’t control the weather, I was mad at Mother Nature. The weather was projected to reach a record high of 87 in Boston for the race the next day. Most experts suggest a marathoner’s performance is optimal when the air temperature is around 50 degrees. I knew my goal time had to be adjusted because of the conditions. After months and months of training, I felt mad and unlucky.

Before going to bed, I wrote out my race plan – something I usually do several days in advance – but probably good that I had not so I could factor in the conditions. My race plan included physical things such as starting slow, listening to my body, running consistently in the middle of the race, and pushing the final 6 miles only if I felt good.

But equally important are the mental things I wrote down on that race plan. I knew I could not remain mad or unlucky or I would not perform at my best. I had to accept what the day would bring me – the record high temperature and all. I knew I had to adjust my goals. I needed to feel empowered that I could get through anything that happened the next day.

I planned things I would say to myself during the race. Phrases like, “Remain calm,” “Savor it,” and “I am positivity” were written on my plan and then on my arm as a visual cues during the race. I knew I must stay positive and calm to face the elements.

I also planned to enjoy the run. A few months ago I wasn’t even sure I would be able to run the race because of my anemia (iron deficiency). I planned to enjoy whatever the day brought me. I also wrote down on my plan all my best experiences running in the heat to build my confidence and remind myself that I could handle running 26.2 miles on a hot day.

The race plan worked because I woke up on Marathon Monday with a new perspective. Ready to go and empowered to be my best regardless of the elements. I had adjusted my plan and my goals and was ready to rock it in the heat.

I followed my race plan to a T. With my first two miles as my slowest miles of the race, I started conservative. When my quads felt tight at mile 11, I backed off and took it easy to mile 14. I stayed strong up the hills to the top of the infamous Heartbreak Hill at mile 20. Then I kicked it in the final 6 miles to finish almost a minute per mile faster than I started the race.

I used my mind more than any other race I have ran. I ran smart and listened to my body. I remained patient because I knew if I did not it was likely that I would not finish the race. I smiled a lot and enjoyed the experience. Because of this mindset, I finished the race 3 minutes faster than my best marathon time even in the heat. It felt like a mental victory in so many ways and an importance lesson for me to listen to the body in future marathons.

Chaun Cox, who has run over 20 marathoners and ran Boston for the second time that day, also learned quickly what the heat could do and the need to adjust his goals. Given the conditions, he started the race at his goal time, but realized by the 3 mile mark that he had to adjust. He listened to physical cues like his breathing and his heavy legs and made the decision to adjust. He said, “Boston was a good exercise in being flexible and being honest. You can’t control the weather or how things go that day….you have to be flexible, smart and listen to your body.”

Jim Kalina, who ran his first Boston Marathon, knew in the starting corral that he needed to adjust his goals and the goal time he was hoping for was not an option. Although he was disappointed that he was forced to change his plan, he knew he could finish the race if he ran smart. He has this advice for others: “90% of things you have control over. But there is that little bit that you don’t have control over like the weather. Embrace that because you can’t change it.”

Many of us set a goal and then are unwilling to adjust it. We let our emotions like our anger or disappointment get the best of us. But the Boston Marathon this year was a good lesson of the importance of adjusting your goals and having control of your emotions during a performance. It reminds me that all we can control is ourselves and our reaction to a situation. We cannot control what happens around us – be it the weather or other people. All we can control is our reaction to the situation we are in.